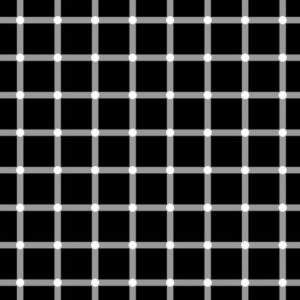 We have all experienced not seeing what is in right in front of our eyes. For example, keys or a pen on a table that were invisible before someone pointed to them. Its called Inattentional Blindness and this just means that the brain was for a moment unable to process an image and therefore could not see it. The eyes saw the keys, but the brain didn’t. Everyone overlooks stop signs or red lights. Each eye takes in 1,000,000 bits of information every second, but the filter in our brain only sees 40 bits of information in that same one second. So its human to overlook something if we’re thinking about something else Like the image below, its almost impossible to see all 12 dots on the grid at the same time.

It is for this reason that every time we are driving, we overlook many potential hazards, often right in front of our eyes. As hard as it is to imagine, last year while driving, a friend completely overlooked a wild horse walking along the side of the road, It wasn’t until I mentioned the horse that he noticed it was even there. We were in a conversation and he didn’t expect to see a horse, so he didn’t. This type of optical blindness is often what causes crashes with motorcyclists or bicyclists. If you are not looking for it, then its invisible. In the majority of car – motorcycle crashes four words are usually written on the accident report… “I didn’t see him”. And the driver is not lying… he or she simply didn’t see the motorcycle. Most drivers will admit to a similar experience sometime in their past.