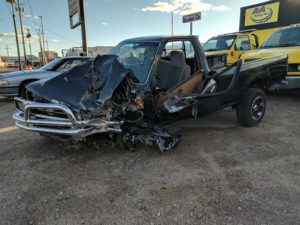 According to Nevada Zero Fatalities, the number of young drivers involved in fatal crashes in Nevada is showing an upward trend from 2014 to 2016. 2017 crash stats are still to be finalized. 20 young drivers were killed in 2014 21 young drivers were killed in 2015 32 young drivers were killed in 2016 From 2015 to 2016, young driver fatalities increased almost 35% in Nevada. Young male drivers were 3 times more likely to be killed in traffic crashes as young female drivers. Comparing total crash fatality numbers (11% ), it can be anticipated that the trend for Nevada will persist as the population in the Silver State continues to increase.  The primary causes of young driver fatalities is inexperience and immaturity.  Too often parents rush to have their teens licensed because they have gotten tired of being their child’s chauffeurs.  But the majority of parents don’t realize that placing a steering wheel in the teen’s hands is the fastest way to end their lives. In truth, nothing will kill a teen faster than driving a car. And another contributing mistakes made by parents is that they purchase a cheap and unsafe vehicle as their teens first car. Teens are not typically good at being responsible for a vehicle and so the parents decide to let the teen drive a cheap car to keep expenses down.  In the past teens learned to drive at school with instructors, but today, that has changed and parents have been left with the responsibility of teaching their teens. Its not that the parents are poor drivers, but they simply don’t know how to translate they years of experience into a language their teens would understand, learn and apply to remain safe on the road. This also accounts for why auto insurance is so expensive for teens. For teen to receive a driver’s license, they really should be taught by a qualified driving instructor and their driving skills evaluated every one or two months for the first year they are licensed.  To teach the theory of driving in a 30 hour driver education course and 50 hours of parent supervising their driving is far to little. This is reflected in the sheer number of teen driver crashes, injuries and death on our nation’s highways.  As a professional driving instructor and educator, this is inadequate for teens to be safe behind the wheel.  There are a number of other factors that contribute to teen driver tragedy, but there is little political guts to make the necessary changes to keep our young adults safe.